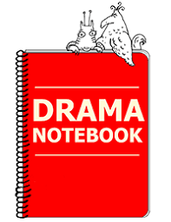 The Great Canadian Student Monologue Writing Challenge sponsored by The Drama Notebook
​Students from across the country will submit their original monologues and the best will be recognized. They will have their work published on our website and with The Drama Notebook. Monologues should be between 150 to 300 words maximum and must be written by a single student - not a group of students.

I’ll Miss You Too
By: Alexandria Davidson, Age 16
From: Ontario, Canada
Description: This piece is based on my real life experience as I parted realms with my late  father, Jeffrey Alexander Davidson (https://ottawacitizen.remembering.ca/obituary/jeffrey davidson-1078535187). It is told from my creatively augmented inner perspective.
Genre: Dramatic
​
“You’re stronger than I thought you were.”
Oh, I don’t think I’m strong. You though, you’ve been through so much. Yet people question  why you continue to drink, and staggeringly, if you’re okay.
“Stop asking if I’m okay.”
It makes you sad when someone asks if you’re okay. Because they know, and you know, you’re  not. I accidentally did ask you one time. Your response still lingers in my mind, your smile.
“I’m okay.”
You heard sniffles, under a poorly masked smile. I was trying to be strong for us. “Lexi, are you crying?”
I was scared you weren’t going to be okay.
On a separate occasion, you were laying down, I was tickling your hair.
I began to tear up, and you just opened your eyes and smiled.
All I could see was your beautiful blue eyes, and I was thankful I have the same ones. “He’s not going to make it to tomorrow”
There's no way. We’re gonna go boating next summer. We talked about it. We’re gonna go  tubing, all of us. He’s gonna be so excited to play games for real again, I got him an Xbox for  Christmas, it's in two days. We’re gonna play a lot of games again, like we used to. I’m gonna  be moving into his apartment.
We’re
gonna
be
together.
“You got that from me, you got that from me.”
A chin-dimple I was insecure about when I was younger. I cried when you teased me for it, but  it feels good to look in the mirror and see you. To look at my eyes and see your eyes. To drive  the boat and to make new memories. To build a better future, with your name everywhere I  go.
We were together. Those moments I’ll never forget, and they’ll always be ours.

A Word to the Living
By: Sophia Blakely, Age 17
From: Ontario, Canada
Description: A ghost of a soldier attempts to dissuade living soldiers from continuing to fight  in what he believes to be a losing war.
Genre: Dramatic
[Austerely] Those men who still have their living wits about them, listen well to what I’m about  to say. The world is cruel. That fact is without debate. [Scornfully] I have witnessed first-hand  how vile men can act in times of war and tyranny - all in hopes of their survival, and possible  glory. But that is strikingly less noble. I was not unfamiliar with traversing trenches - walking  back and forth as the pools of mud tried to swallow me whole. I first maneuvered that path  when I was younger than most of you are now. Though I’m not young anymore. Really, I’m not  much of anything. [Dejectedly] It was an unfortunate thing to be my age in a war like that. If  you fought well, you were guaranteed a spot in the next one. We all learned that lesson too  late. [Dementedly] So, I’ll say this to you. If it’s glory you seek, go home. If it’s pride that’s  keeping you here, go home. And, if it’s a life you want at the end of this, go home. Had I  known better, I would have done the same. It bodes well to be a coward at a time like this.  [Absently] Ah, but death is calling me back. How sweetly she beckons. Adieu. Adieu. Adieu…  [Trails off]

Death No More
By: Lauren Mohr, Age 14
From: Manitoba, Canada
Description: A soldier finds out they have died in battle.
Genre: Dramatic
The last thing I remember is trying to duck from the horrific sounds coming from the other end  of the field. I felt pain and then…black nothingness. I woke up in a familiar place. I couldn’t  remember but then it came to me…I was home. Finally, no more feelings of fear and terror. No  more death. No more loss. No more depression. I made my way out to the kitchen and then I  saw her. The beautiful woman I was going to marry one day standing there just in her beauty  alone. We are only sixteen, so Mom thinks we’re too young, but one day it’ll happen. I just  know. The feeling of excitement came up inside of me and I ran to her, to comfort her from  feeling alone. But then I realized that tears were overflowing from her eyes. She fell to the  ground. Sadness filled the room when I saw it. The paper she was holding with my name and  the time of death. William Jones 15/05/1942.

Letters
By: Maddie Hazeu, Age 14
From: Manitoba, Canada
Description: A letter to a fallen soldier from a wife.
Genre: Dramatic
My Love Charlie,
I miss you. I know you said to stay strong and to take care of the family for you, but it is hard.  Not a day goes by that I don’t think of you. I hear the sound of marching boots in my dreams,
wondering if you’ll ever come home. Every time the doorbell rings, I’m scared to answer for fear  of bad news. Don’t think I’m not proud of you love, our country needs you. You trained hard  and worked harder, being more than just a soldier to most. Charlie, please do your best to  make it home and meet your son. He has red hair, and brown eyes just like his father. I hope  this letter (with pictures included) reaches you in good time, and that you may find joy and  comfort within. We miss and love you so much.
From your Love,
-Catherine and baby Jake.

(in no particular order)
A Poppy Addresses the Sky
By: Joy Shen, Age 17
From: Ottawa, Canada
Description: A poppy addresses the sky and reflects on its feelings towards war. Genre: Dramatic
Dear Sky,
I have stared at you for what feels like years. Wonderingーwondering whether there will be an end to this bloodshed. Each day, I see countless young men and women scurry around the  battlefield, carrying supplies and tending to the fallen; certainly afraid, but not showing any  signs of such emotion. People in different uniforms unload all sorts of munitions and discharge  them toward their enemy. But in this chaos, I ask, are the lives of thousands worth losing over  this conflict? I am but a simple flower on this battlefield, but I yearn to see when those of  varying backgrounds can come together. I want to hear the cheerful laughter on summer  evenings and feel the Sun’s welcoming rays. The Sun no longer shines with warmth and the  rain no longer drops down to heal the Earth. The ground is scorched by ammunition; the air is  filled with deafening screams. Balls of fire engulf the once peaceful silence of nighttime. Every so often, I see fresh faces of those eager to assist their nationーbut like me, many only know  part of the narrative. Soon enough, the youthful hints of joy in their faces morph into haunted  eyes and empty expressions. My stomata tire from breathing in fumes of havoc. O, Blue Sky!  When will this tragedy end? Every battle is promised to be the last, yet again and again, blood  spills over these fields. Only the creativity of the soldiers’ letters makes this place tolerable. If I  could, I would extend my stems across borders and persuade both sides to reach an  agreement. I would weep tears for the fallen and cure the ill. I may not be an architect of  peace, but I am poppy. I can and will remember those that served.
Where Did My Best Friend Go?
By: Kyra Scollan, Age 13
From: Manitoba, Canada
Description: A dog wonders where his owner went after he left for war.
Genre: Dramatic
My best friend left 3 years ago. I've been waiting for his return since I was two. “I won’t be too  long, pal, just hang tight. Be a good boy for Beth!” That’s what he said before giving me a treat  and walking out the door. Now I sleep by the door each night hoping he walks through and  gives me a big hug. I miss his joy and his scent and playing catch with him. I whine every night  for his return, I’m so confused. He was my only best friend. No one has ever shown me the  same love James did. I don’t understand why he left. Does he hate me? I whimper at the  thought. If only I knew what I could’ve done better for him to stay, at least a little longer.  Where has my best friend gone and why?
Missing Dad
By: Danica VAN Leeuwen, Age 14
From: Manitoba, Canada
Description: A dead soldier’s dog reflects on how much she misses him.  Genre: Dramatic
I miss Dad. Why did he have to leave me and mom? He told me that he would be back soon.  That was 3 years ago. I’m starting to think that he will never come back. I still sleep by the  door every night, waiting, hoping and dreaming that he will walk through that door. Mom tries  to make me feel better, but she will never replace dad. I love mom and she’s trying her best  but it’s not the same. She always looks sad as well. She tries to put on a brave face, but I know  she misses dad too. She tries to distract herself with work but even that doesn’t make her  happy. I try to help her, but let’s face it. Dad’s not coming back. He’s always had a heart to  help people and he’s not going to stop until he has to. He’s always been that way. That’s what I  love about him but also what I hate about him. I just miss him and hopes he comes back soon.